Waking up early as usual I decided at short notice to leave the house and head for the hills. As we’re heading towards the end of the year it’s a lot easier to manage this with the later time of the sunrise, on this morning it was going to be at 0758h.

I quickly packed up my bag, it was going to be a morning of landscape work so I decided to take my GFX 50s with the 32-64 mm, the 250mm and the 1.4x converter (as you can see from the title image, the day took me in another direction). I made sure that my filters and rain jacket were in there too. Grabbed my head lamp and water was already in the bag. Picked up my tripod and I was out the door.

I drove out of the City, on to the motorway and then chose to go towards Chilchzimmersattel in the Belchen area of Baselland. I had to go to the renovation site later in the day, so staying in the region seemed to be a good idea.

There was already one other photographer parked up and going up toward Belchenflue, I was planning on taking a different direction though.

At the edge of the dark forest I opened my bag to take out the headlamp, which wasn’t there (when I got home I found it next to where I had packed the bag) and at the same time I remembered that I had taken the water bag out for cleaning a couple of days before!

With no headlamp or water I slowly made my way into the darkness of the forest. A forest during the day is peaceful, and even with the wind blowing through the leaves and the bird song it’s quiet and relaxing; a forest at night is not. A forest at night is loud, and without a headlamp, very loud. It was a day or so away from full moon, but once I was below canopy, encircled by trees and shrubs, it was dark.

Every sense is more active, my eyes wide open concentrating on trying to see the path. This route takes me past some old military ruins and has steep drops that I would prefer not to fall down. I’m listening for any movement. I know that there are deer and chamois in the forest, but I also know that there are wild boar and there is also a lynx in the region.

I know that these creatures will hear me first and will most certainly go the other way, but there is something haunting that makes you expect that something is always just about to jump out of the undergrowth. It’s absolutely wonderful!

I am out in an open field with still around a kilometre to go to where I want to be for the sunrise. Happily strolling along admiring the ever increasing colours appearing in the sky, I am suddenly aware of a movement out the corner of my eye. Everything slows down. With the adrenaline from the time in the forest still running through me, in what feels like the time between a heartbeat, I turn my head in the direction of the movement, see something in the shadows that has a vague animal form, drop to the ground and hide behind a small rise.

I take my rucksack off, crawl slowly up the rise hoping that whatever is there hasn’t seen me. I haven’t exactly been walking slowly or quietly over the field, but there is a strong wind blowing in the right direction that could be working in my favour.

What I see, as you know from the title image, is a chamois, but it isn’t only one, it is a herd of thirteen. That I am not seen by or startle any of the herd is sheer luck. I crawl back to my rucksack. Lots of thoughts are now going through my mind. I want to get images of this. How can get images of this? Where can I go? Is there a place I can get to which has a good view, but will still hide me enough from their view? Why did I decide to bring the GFX 50s? as much as I love this camera it doesn’t have the reach that I want. The Sony A7III with the 100-400 would have been better for auto focus and reach.

There is part of one of the old military building ruins just above the ground close by, if I’m very careful, I can get to it. It’s buried with only the concrete platform of the roof exposed at ground level with a small bush in front of it. This should provide at least some protection.

Keeping very low to the ground I crawl over the grass to the platform. I can’t see the chamois anymore, are they still there? At the platform, I leave my rucksack to the side and crawl the final couple of meters with just my camera.

Heart pounding I look over the edge, they are still there! A moment of happiness strikes me before the thoughts start rushing in again. Do they flinch? Do they look like they are about to take flight? Are any of them looking in my direction?

I remain motionless and silent for a few long minutes watching for any signs, before I feel comfortable enough to bring my camera up to take a closer look. If they have seen me, they are okay with my presence, or at the very least they are accepting it for now.

You can see in the following image what I saw after crawling up the rise. It was a lot darker so I have brightened the image to make it easier to see the chamois herd.

Over the next 10 minutes, I very slowly rolled back and forth over the platform, to and from my rucksack to get another my tripod and then another lens, all the time watching intently for any reaction, freezing all motion if I thought that there was any acknowledgement of my movement. It was still quite dark and I needed to use the tripod for stabilisation. I had the feeling that they knew I was there because one or the other would occasionally look in my direction.

From this spot I was able to watch the herd for the next hour and a half. Most of the pictures were shot in the last half an hour though, when the light began to force it’s way through the trees. Unfortunately this was also the trigger for most of the herd to start moving back towards the protection of the forest.

On the plus side this was also the place where the colours of autumn were strongest. I just needed a little bit more light to reach there.

A few stray sun rays started to appear between the trees, drawing the chamois further into the forest.

And then, finally, the first rays of light started to shine across the field, lighting up the fallen leaves.

Unfortunately most of the chamois were now in the trees. I was still able to get a few more shots though. 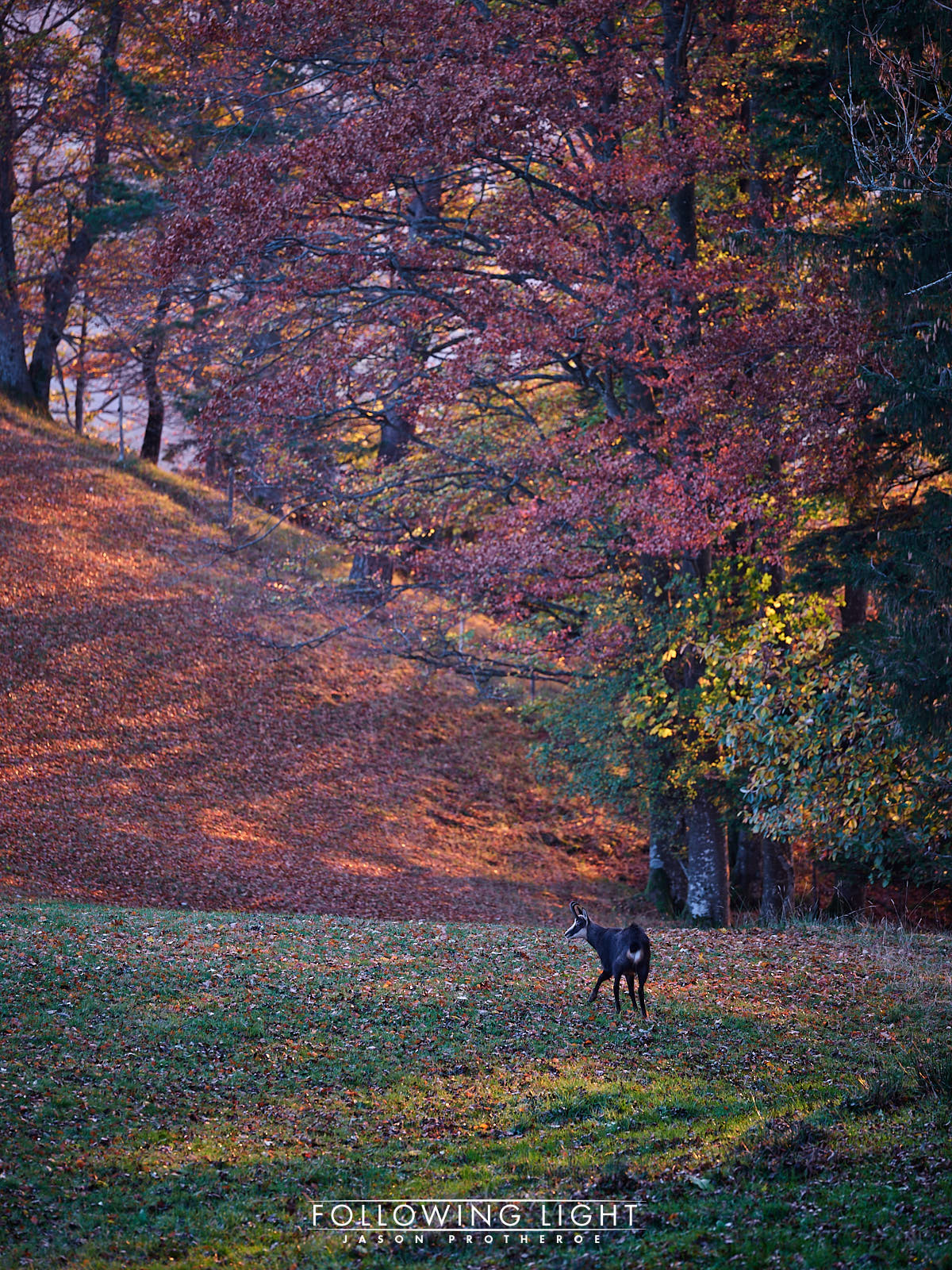 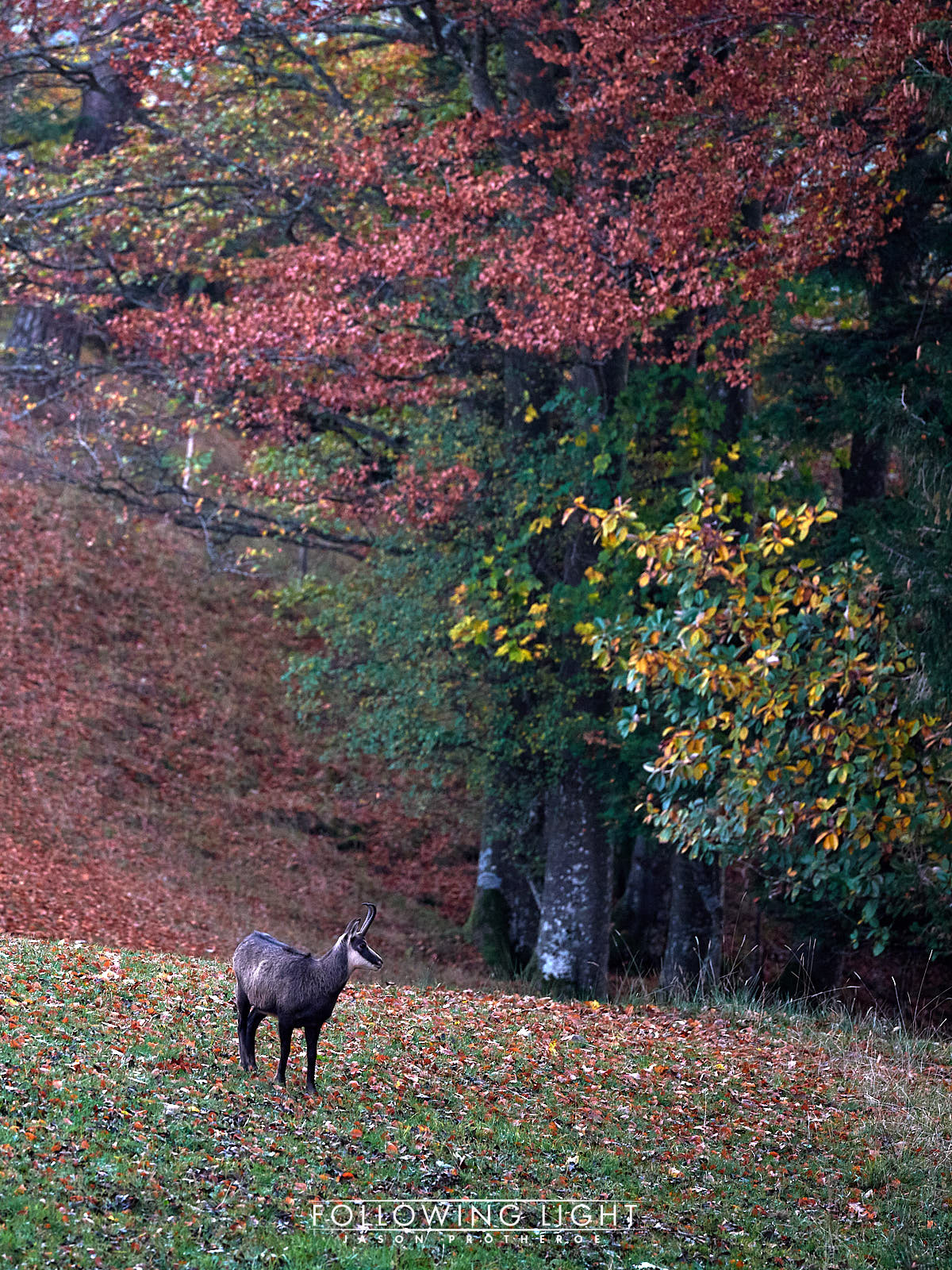 When I decided to leave, I could still see most of the herd. Most of them were lying down in the cover of the trees at the edge of the forest, but there were still three out on the field. My walk back took me up through the forest, from this path in day light, I could see the area where the herd was. The three that were there when I left my hiding place were still there. I walked the rest of the way buzzing from the experience and happy with the thought that I hadn’t disturbed the herd from doing what they would have been doing had I not have been there, but also realising that I had completely forgotten about the sunrise!

These last two shots in this post are from the three that were still out on the field.

Before I close this post, I have a few words about the GFX 50s. I mentioned earlier I had wished that I had taken the Sony with me for the extra reach, although this is still true, I would have obviously got more reach with a 400 mm on the Sony or even 800 mm with the 2x teleconverter, the GFX 50s more than made up for the lack of reach with the detail that the sensor can capture and the resolution of the images. I’ve got 51 megapixels creating images at 8256 px x 6192 px on the GFX 50s, compared to 24 megapixels at 6000 px x 4000 px on the Sony A7III.

In this type of situation, I wouldn’t hesitate to take the GFX 50s along again for wildlife photography, I am more than happy with the quality of the images that I captured. I will definitely be trying this again, and I’m also thinking about trying it with the Sigma 150-600 mm or possibly the 60-600 mm.