It's been two weeks since the last entry, and this time is wasn't work that got in the way. This time I had a good reason, I've been away for a week on a Photography Workshop in the Lake District with Simon Baxter and Thomas Heaton.

Be warned, this is going to be a long post! 5 days worth.

As I'm still, or rather was still undecided on systems, I decided to take both Olympus and Sony with me, and not wanting to put it in the hold of a plane, I decided to drive. From Basel to Calais was uneventful, a smooth ride with no traffic and I arrived an hour early.

I won't go into details because, they're really not that interesting, but the rest of the journey involved a broken down train, traffic jams and diversions. All of this ended up delaying the arrival by around two hours. I'd arranged to arrive a day early, so it wasn't too bad.

The course was marvellous, I really thoroughly enjoyed every moment of it. If you don't manage to read further, I will tell you now that I can, without a second thought recommend this course should it take place again. Should it not, then I would also recommend a course with Simon and/or Thomas.

If you are reading further, then you may also be interested to hear that there were some parts that felt more on par with a boot camp, but that is less to do with the course and more to do with the speed that I generally walk around the hills and mountains on my own at home. Which to be perfectly honest, would be better described as a dawdle than a walk. Especially not when compared to the brisk uphill walking (jogging) speed of most of the group. Luckily for me, not everyone wanted to sprint up the hills, so I still had some company.

So that I don't keep repeating myself, the plan for each day remained very much the same

The first images are from the first morning at Rydal Water.

I waited a long time, hoping that the sun would hit this small island and light up the trees and the cormorants perched in them. Obviously it didn't happen or there would be an image below of trees glowing in the early morning sunlight. Although it didn't happen, there is something about the contrast of the green trees and the orange hills that still appeals to me.

After breakfast it was a hike up to King's How for the afternoon and sunset. The view from the top was clear, but grey skies. It didn't look too promising for a sunset.

The sun light was dappling on the the hill sides so I took a long lens to isolate parts of the landscape rather than try to get the whole thing in.

The next two images are isolated parts of the third image.

I've included the next image mainly because I like the simplicity of it, but also because it's one of those images with the Olympus 300mm f/4 that is sharper than I usually get. There are three people in this picture, and in the full size image I can see that the person higher on the hill is using trekking poles.

Then wow again. An unexpected sunset began to light up the sky.

End of the isolation with one panorama before starting the walk back to the transport back to the hotel.

The walk down in the dark was interesting, but we managed to all get down in one piece, and we survived!

Day Two: The morning trip started along the River Brathay, with not much to report from my side. The composition that I wanted didn't quite work out as I had expected.

The afternoon on the other hand was better for me. We spent the time in and around Buttermere. The colours on the hills were amazing, and I found that I was staring at the landscape instead of looking for a composition. The solution was to not look for a composition. I walked around the mere for a a while, found a place on a beach to sit and take it all in for a while.

From my place on the beach I started to virtually explore using a long lens to take a closer look around the mere. The low position gave me an interesting perspective across to a building on the other side of the mere.

The same building can be seen in this image too, but this time I've gone for a wider shot to show the amphitheatre look of the surrounding hills.

I walked further around the shoreline to discover this composition. As the water level was quite low I was able to get down to this spot. I love the tunnel perspective, the angle of the trees over the water pulls the eye further into the image. I would have loved to have some mist and the water level slightly lower, so that more of the gravel bed would have been exposed to creating the feeling of a path.

I'm still happy with this image though, and it's one of my favourites from the course.

Day Three: The morning started with lots of snow, which was gone by the evening, but we still managed to make the most of it with a trip through Penny Rock Wood, along the River Rothay and Grassmere.

At this location I headed in the opposite direction to most of the group. I didn't come across much at first, but the still of the forest with the snow falling and the occasional bird song, was absolutely wonderful. As with the day before, I took some time to experience the surrounding before looking for an image.

And what better subject to find in winter in the UK than a robin in the snow.

This one stayed around me and kept me distracted for quite a while.

After dragging myself away from the robin, I made it down to the lake. Snow still falling.

I unfortunately had to miss the afternoon trip to Manesty Park and Loughrigg Fell, as I needed to get some urgent work done. On the plus side, I was able to recuperate a little!

The day started earlier than the others as we were hiking up to Catbell in the snow and ice, and as we already know, my pace is not the fastest. The hike wasn't too bad, the crampons certainly made it a lot easier, and the view from the top was well worth the hike.

I went for isolation again with this location.

I'm not keen on this image, but I've included it as a novelty; there is something strange. It looks as if part is in colour and the other part in black and white; it's not though! It is a complete colour image.

You can also see how the cloud formation in the previous image is moving towards the peak.

Hodge Close and Holme Fell. These two locations are next to each, the first image is close to the quarry the second, from from reeds in one of the frozen tarns.

The final image for this post is another favourite. With guidance from Tom I was able to get this image. Something new and a different direction for me.

An extra two behind the scenes shots from this image. One of the camera and the tripod on a thin layer of ice, and a closer view of the screen. You can see from these images that that scene wasn't quite what you'd expect. 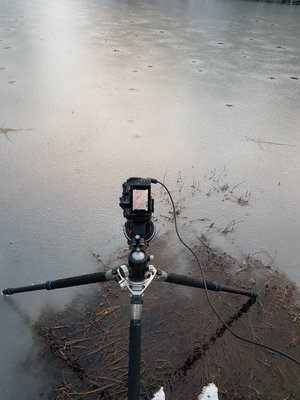 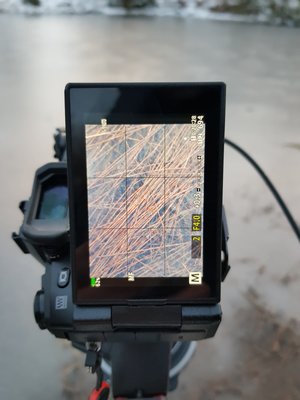 Day Five: Well, lets just forget about day five. I just could not find a composition that worked for me at all.

Day Six: There was a chance to go out in the morning, but as I has to drive down to Calais, I chose to use the time to pack and prepare for the trip. A choice which I do not regret at all, the drive back to Calais also involved a few issues; traffic jams, a diversion and a broken down train, but as a added extra it also included narrowly missing a pile up on the motorway and a blizzard in France!

All in all an eventful trip. Would I do it again? Yes, in a heartbeat.